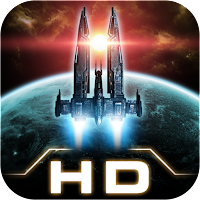 Supernova is the third chapter of the Galaxy on Fire 2 iOS game. I've already covered the first and second instalments in the past for MacLife, but here's a quick recap...

Galaxy on Fire 2 is a space exploration, combat and trading game whose concept is very similar to the 80s sensation, Elite. Of course, the graphics are sublime in comparison, and unlike Elite, there's a storyline which you can choose to follow or not (nothing will happen to the main storyline while you're off exploring on your own).


You can control your ship either by using your iOS device's built-in accelerometer (ie you tilt it to turn your ship), or reveal a virtual gamepad on the screen. I find the former works well with an iPhone while the latter is better suited to an iPad.

Aside from the main story, you can also perform mini-missions which are not related to the main storyline, by visiting the local bars and talking to the residents, but these get a little repetitive over time, although they're a great way to discover coordinates to hidden solar systems, blueprints for powerful equipment, and of course, to earn some money. Along with trading goods between solar systems or mining asteroids, accomplishing such missions is great for your bank balance (if you succeed of course), and you need a lot of income in order to upgrade your ship with the latest and greatest gear, and even acquire more powerful vessels.

The first chapter has the protagonist, Keith T Maxwell, trying to get his bearings after having been catapulted 35 years into the future and thrown into an unknown part of the galaxy due to a hyperdrive malfunction. You'll have to learn your way around unfamiliar surroundings, make alliances, and tackle the deadly Void who are attacking all races from a parallel universe.

Chapter two (available as an in-app purchase) moves the story along and deals with a new faction, and theft of intellectual property. But despite the excitement of exploring more of Galaxy on Fire's worlds, gaining access to additional equipment and new ships, the events end much too soon. On the plus side, a black market trading system is introduced and you're given the option of acquiring a space station, the Kamoo Club, whose advantage allows you to keep vessels as opposed to swapping one for another when purchasing a new one, and get access to a practically limitless cargo hold.

So now we're onto chapter three, Supernova (also available through an in-app purchase). A sun is exploding, causing confusion and disarray among all known species and solar systems, and you must help with the evacuation while trying to figure out what happened and if anyone might possibly be behind it.

On top of which, many new features have been introduced, like being able to hack into security systems, gaining access to the list of the universe's most wanted to hunt down fugitives, and even capture rare and highly volatile gases, crucial for dealing with the crisis at hand.

All these additions make for a more varied experience which should keep you busy for quite some time.

As always the vocal work is excellent and it's always fun to hear the various characters come to life before your ears.

Your space station becomes an even more crucial base since its space lounge now contains people eager to sell you powerful ships and equipment, or even augment the capabilities of the vessels you already own. It is by no means necessary to own the station in order to complete your task, but it does add a lot of fun to the experience and will definitely give you an edge that you wouldn't otherwise have.

You can acquire the Kamoo Club either through the game's business mechanics or with the help of an in-app purchase.

More annoying is the Kamoo Club VIP Card in-app purchase which you can use to halve the asking price of all transactions performed in your station's lounge. $0.99 is a relatively small price to pay for much more affordable goods, but it feel really cheap from the developers to stoop to the level of freemium games.

Some of the storyline feels a little sexist and it gives the disappointing impression that you’re taking part in a 50s B-movie rather than a modern space adventure.

Those niggling matters aside, Galaxy on Fire 2 is an excellent game and its three chapters will give you hours of entertainment and action on your portable device - and even though the story ends here, you can keep on playing, acquiring more riches, ships and equipment while trying to earn medals by performing specific and sometimes quite tricky tasks (collect all medals to gain access to unique and powerful ships).

If you're a fan of space exploration and combat, with the occasional bit of trading and research thrown in, grab yourself a copy of Galaxy on Fire 2 for your iPad, iPhone or iPod touch. You won't regret it.

The HD version contains more impressive and detailed graphics, and any device from an iPhone 4S and iPad 2 onwards will be able to take advantage of it.

If your device is older, you'll have to choose the non-HD version which features the exact same storylines but with graphics your machine can handle without crashing.