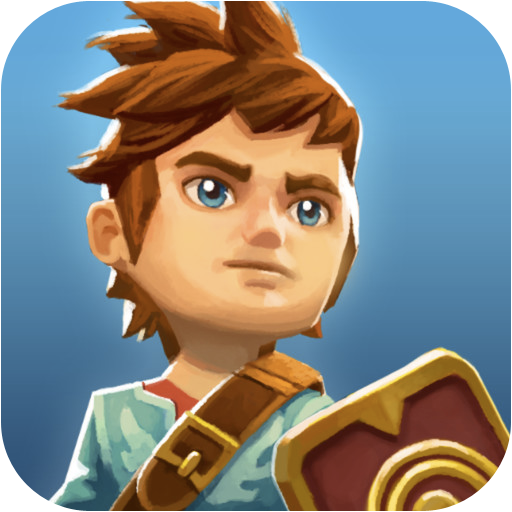 Creating a game is no easy task; Forge Reply for instance, had a team of fifteen working on the excellent Joe Dever's Lone Wolf, so it's pretty remarkable that three people set about creating and designing a vast, ambitious game of adventure and exploration for iOS called "Oceanhorn: Monster of Uncharted Seas".


I spoke to Heikki Repo, Creative Director at Cornfox & Bros, the man responsible for Oceanhorn's design, story and graphics, and I asked him how long it took to create. "I wrote the first game design of Oceanhorn in the beginning of 2010, right after our company was established." He told me. "We soon got the chance to be the developer party for Death Rally for iOS devices and froze Oceanhorn for a year and a half [Death Rally is a top view car racing game with a difference: you can equip your vehicle with weapons and armour, and blow your opponents out of the race]. We started full production of Oceanhorn in the end of 2011, around the same time when we announced the game in our blog."

"It gathered much more audience than what we could have ever estimated! In one single day, 100,000 people visited our blog for more information, and we only had one concept screenshot on display."

"Production saw another halt in the spring 2012, when we focused on making a Steam version of Death Rally. From August 2012 until the release now in November 2013, we worked really hard to create the game everyone was expecting it to be."

"Our core team is three people. I'm responsible for all the design and art. Antti and Jukka Viljamaa are brothers and programmers of our team. We use freelancer audio designer from Kaamos Sound company, Tapio Liukkonen, and the majority of the soundtrack is composed by Kalle Ylitalo."

The game's objective is to explore the numerous islands around you, solve puzzles, hope to find out what happened to your father, and rid the world of the monster that has plagued your world for a thousand years, Oceanhorn.

The design of the game is absolutely beautiful and incredibly inviting. The artwork is superb and the controls are kept to a minimum: in order to move, hold your finger on the screen and drag it slightly in the direction you'd like your character to go - which can sometimes feel a little clumsy when you need to tread carefully or go in a very precise direction. There's also a big red button to perform an action, like lifting or pushing an object, opening a safe, unlocking a door or, of course, fighting. That button is obviously context sensitive depending on where your character is at the time it's activated, and it works well - most of the time; there are some occasions, if you're too close to another item during combat, that you'll start reading an inscription instead of delivering a killing blow, but thankfully, those instances are uncommon.

There's a role-playing element to this game as well, and the more you explore and fight, the more experience points you'll earn, enabling you to gain levels of expertise which in turn augment your skills: you can swim for longer, hold more items, or even gain new equipment. Money, health and mana potions can be found anywhere: inside jars or hidden in overgrowth or bushes, for instance. This game encourages you to break pottery and mess up the countryside in order to keep yourself rich, healthy, and powerful. I wonder if there’s a subliminal message in there somewhere...

Through the course of your travels, you'll learn how to cast spells, and discover powerful weapons, everything you need to achieve your quest, and gather the various objects that will enable you to defeat Oceanhorn.

Exploration is a huge part of the game, but so is puzzle solving. The developers had to strike a good balance between complexity and the limited time most of us have at our disposal when playing a mobile game, and it certainly looks as if they've succeeded, but there are some moments when you're at a loss at where to go next. The more you explore, the bigger the world becomes and sometimes, your options are so open ended that you're stumped as to what your next course of action should be.

It's extremely important to talk to anyone you meet and read every sign you find as many hold clues you need to complete your journey. In fact, new islands won't be discovered unless you do just that, and it's often a good idea to talk to the same person more than once as they may have something else to divulge.

The boss battles can be quite challenging and are a far cry from the more thoughtful aspects of puzzle solving. Each boss has specific strengths and weaknesses which you need to discover in order to win the battle more easily, but don't distress if you die in battle - or elsewhere. Death is merely a temporary inconvenience which only leads to the loss of some experience as you respawn close to where you fell. This is a great feature as it means that you can easily pick the game up at any time and start again without having to work for ages before getting back to that tricky part of the game.

As you can probably imagine, this is a pretty big world. The developers claim Oceanhorn offers 11 hours of gameplay and this is borne out by my exploration of the game. Highly impressive for something created by just three people.

If you're a fan of this type of game, it's almost inevitable that you would've noticed more than a passive resemblance to a famous Nintendo franchise, Zelda. In fact, many who've played this game haven't been shy about calling Oceanhorn a blatant ripoff, while kinder souls have instead referred to it as a love letter. I asked Heikki what his views on this were.

"This is the vacuum we saw in the App Store", he explained, "there are no good japanese action RPG there, especially not one with an emphasis on environmental puzzles and exploration. For a game to succeed, it needs to be recognized as a representative of the genre, yet there are way too few games coming to the Zelda-genre, and production of Oceanhorn taught us that there was a reason for it: it's a very difficult genre!"

The similarities are also reinforced by the music, which was partially written by Final Fantasy composer Nobuo Uematsu and Mana and Saga series composer, Kenji Ito. How did they get involved? "It was all thanks to our publisher, FDG!" Heikki reveals. "When they joined the production, they said they will try to get them onboard, and they did! The message we got from FDG was that they liked what they saw in this game and decided to join the music production! Their work fits seamlessly in the world of Oceanhorn and into Kalle Ylitalos' music."

"We started with Ylitalos before we knew of the possibility to have Uematsu and Ito. He did the majority of the songs on our soundtrack but when Uematsu and Ito came aboard, we gave some of the most central songs for them to compose. Uematsu did the main theme and the sailing theme for instance, while Ito worked on Father's theme which plays in the beginning, and the Mesmeroth boss battle music, amongst others."

Working on a mobile game has additional challenges which a console version doesn't have to content with. For one thing, it needs to be playable at any time, for long or short durations, so it must launch fast, and the puzzles need to be challenging but not too difficult. As Heikki points out, "story sequences can't be long and the game has to flow forward on each play session. We also have some nice modern additions to the genre - we have vast amounts of achievements and we also have a leaderboard, where players can compare their score against friends. As a result, I feel, Oceanhorn is great representative of this genre on mobile!"

One aspect that isn't supported is iCloud saves, which means you can't start a game on your iPhone and carry on with your iPad or iPod touch, but this is something Cornfox & Bros are working on, and will hopefully implement it in a future update. Currently, you can save but two games on your local device.

But this hasn't stopped Oceanhorn from having a very successful release. "Our game's launch was amazing", Heikki confirms. "We were able to shoot to the top of the charts around the world even before App Stores Editor's Choice featuring went on. At the time I'm writing this, we have almost half a million players in Game Center. Of course not everyone has purchased Oceanhorn, there are people who play the same game copy on their own profiles, but it gives an idea of the amount of players there is."

In fact, so successful has this game been that not only do they plan on offering continued support for the foreseeable future, but Cornfox & Bros will start working on a sequel in 2014.

Whether Oceanhorn is a Zelda clone or not is actually immaterial: you can't play Zelda on iOS, and Cornfox & Bros have worked hard to make their game fit and excel within the constraints of a mobile gaming experience.

If you're looking for adventure on iOS this Christmas, Oceanhorn is where it's at.