It's been two and a half years since Bobo leapt onto the scene and delighted numerous iPad owners and their children with its wonderful educational adventures and charmingly quirky personality, effortlessly teaching kids all about the mysteries of light.

But Game Collage haven't been idle since: they've been working on a game which they're releasing today called Axl and Tuna and I spoke to Juraj Hlaváč, developer of the two-man team that created this latest endless runner.


But why, after such a successful education title, did they decide to work on a game? "We're always tinkering with several ideas at the same time," explains Juraj, "and games are very much part of that mix. Before we ventured with Bobo into education, Game Collage had already produced eight games and Axl and Tuna is a continuation of that original trajectory."

"Over the years, we've gotten pretty good at creating dynamic characters and we became curious about how two such characters could play off of each other," he continues. "We found our inspiration in the classic Laurel and Hardy skits and attempted to translate their banter into an entertaining app. We tried a number of approaches and even scrapped several prototypes along the way until we found one that worked. It turned out to be a game."

You control Axl, a robot whose job it is to collect little red fuzzbots that have escaped and are now roaming free along a two-dimensional roller-coaster-type track, populated by quirky robots and other obstacles. At first glance, this looks very much like a run of the mill endless runner, similar to Jetpack Joyride: collect coins, avoid obstacles, nothing new here, but Game Collage have worked hard to inject this genre with something original.

"The most striking difference is the characters themselves," confirms Juraj. "We spent a significant amount of time developing both Axl and Tuna, the lead cast of the game, focusing on everything from visual and sound design to sophisticated physics rigs and autonomous behavior systems. All of these little pieces, each polished individually, add up to a duo of characters with bold and loveable personalities."

The protagonists are indeed incredibly charming and their animation is complex and fluid, but all the other robots you encounter along the way are equally well designed. Axl is a little small on an iPhone, and Tuna's pass-bys feels disproportionately large, but to be fair, you don't look at Axl much as you play since your focus is on which obstacle to overcome next. As long as you don't fall off the track, Axl has two lives; crash once, and he'll be able to carry on, albeit leaving a trail of smoke behind him.

Tuna, is a disgruntled robot bird with attitude (I wonder where they got that idea from). He pops up in a corner of the screen or flies around. Tapping on him releases a power-up which Axl must catch, these include going faster, getting an extra life, doubling up on coins, and turning the lights out; good luck when that happens!

But more interesting is Style. Rather than run down a track continuously, which often ends up being repetitive and boring over time, a problem all endless runners suffer from, you can boost your score by performing optional acrobatic moves: forward and backward flips, bouncing off robots and achieving combos all contribute to your end result. To help you perfect those moves, each day brings a new randomly generated track for you to practise on. You get to learn the layout over time and where obstacles are located, helping you to try and squeeze in a few acrobatics along the way to up your score, before a new day comes and a new track with different challenges and robots is laid before you.

"The difficulty varies daily within certain limits," explains Juraj. "The structure of the track, which includes its complexity, is different. That's very much on purpose so that you, the player, can expect a new challenge each day you pick the game up."

"The tracks are the same world-wide," he continues. "In other words, the track you play on today is the same track that I play on today, on any iOS device. Having everyone on the same track means that daily scores on global leaderboards correlate to each other. And there is no need to use iCloud or web services. Each device just uses the same random seed each day."

The coins Axl collects on his journey don't do much at present; you can use them to keep on playing once Axl crashes fatally, but that's it. However, the developers have further plans for this robotic duo: "the idea is to add a store in the future, featuring costumes, power-ups and such," reveals Juraj, "but it all depends on the players and what they'd like to see going forward. We value our users' feedback and want to make sure we cater to their needs."

This will obviously depend on the success of the game, of course. With an App Store dominated by freemium games which entice you with a free app and a promise of many features - bound inside lucrative in-app purchases, lucrative for the developers, that is - paying for a game outright with no ads or obscene requests for payment to keep on playing is starting to feel out of place. The beautiful endless jumper Ooga Jump suffered from this and was forced to adopt an ad-supported alternative when potential players balked at the exorbitant £0.69 price tag. "We believe there is still a place for polished, well-executed $0.99 casual games," Juraj asserts. "I, for one, am very tired of seeing ads being constantly pushed in my face. I would much rather spend a dollar for an immersive experience that allows me to escape advertising and delivers value. We designed Axl and Tuna to be such an experience."

And this game does achieve what the developers set out to do. It's fun, beautiful and polished, and the fact that the track is set for a whole day does help with the desire to perfect your run in an attempt to beat your score in terms of the number of fuzzbots you catch, distance you achieve and how much style and panache you display along the way.

The only downside is the virtual audience reaction: each time Axl achieves something, he's rewarded by applause and cheers, but I found those too loud compared to the other sound effects. You have no control over its volume level as it's lumped with the other, more discreet sound effects, but hopefully a dial to tone it down - or off - separately from the other sounds will appear in a future update.

I wish it every success, although I was intrigued by the team's apparent obsession with cute animated robots; first Bobo, now Axl and Tuna. " I think robots are inherently cool and they tend to be easier to animate than more organic forms," confides Juraj. "But perhaps you hit on a question which I should ask my psychologist :)" 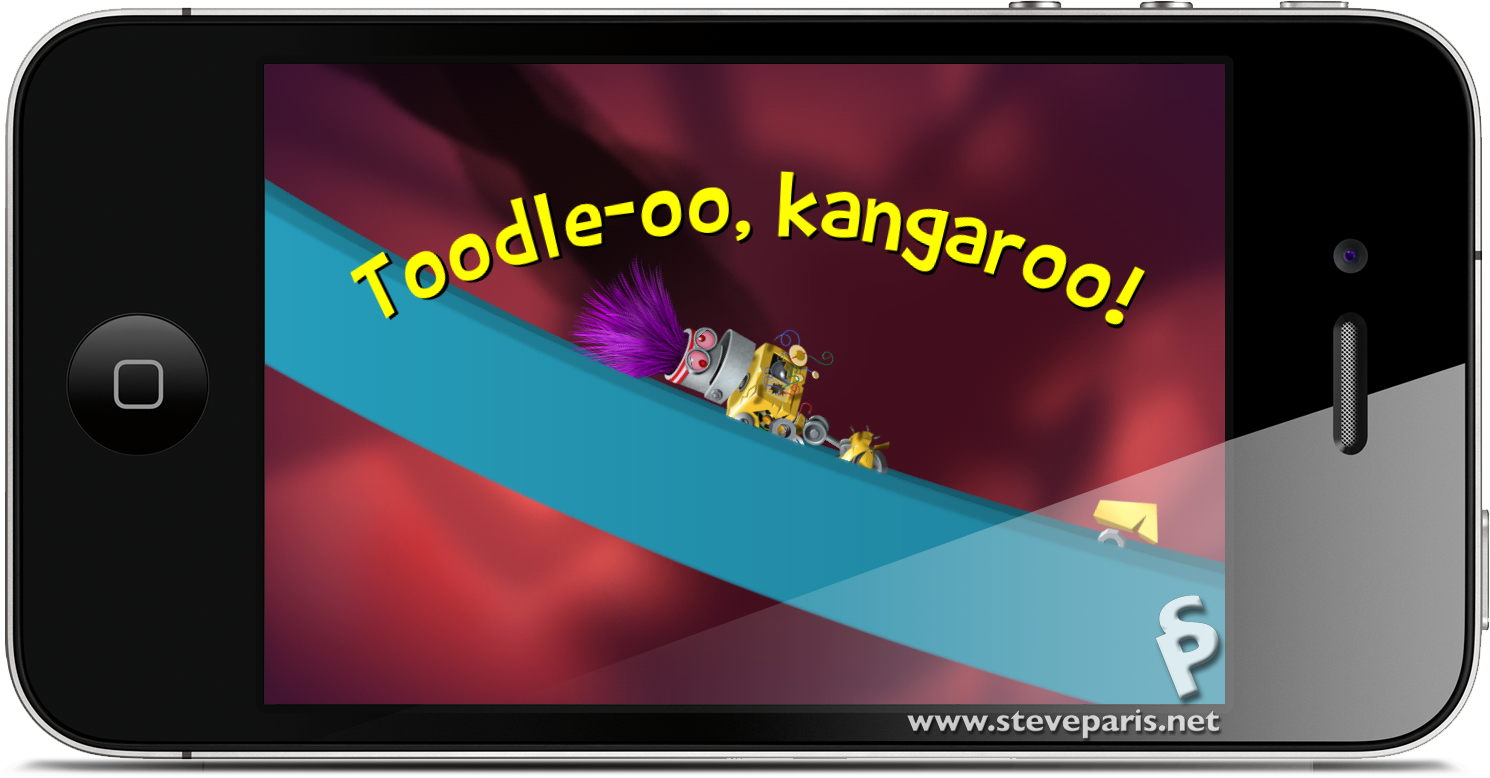 Compatibility: Requires iOS 6.0 or later. Compatible with iPhone, iPad, and iPod touch. This app is optimized for iPhone 5.