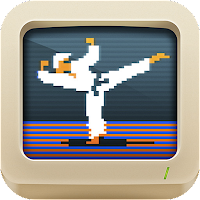 I was introduced to computers in 1984, when my father bought an Apple IIe. With the help of this wondrous new machine, I got to grips with programming, word processing, and unsurprisingly, games. One of these was Karateka, a simple, yet highly impressive action side scroller; you fought your way through many henchmen, avoiding traps along the way, hoping to rescue the lovely princess. What set this game apart was not only its animation, great fight sequences, satisfying musical score, and a simple, yet compulsive storyline, but the fact that you couldn't rely on extra lives to complete your quest. Just like in real life, if you died, that was it. Unlike real life of course, you could go back to the very beginning and try again. Many hours were spent attempting to rescue the girl.

Last year, Jordan Mechner, the talented programmer who created the original, released an updated version, and although the graphics were impressive, somehow, the charm of the original was lost. I did play it, and enjoyed it, but it wasn't Karateka.

It looks like I wasn't the only one who thought that, because Karateka Classic has just been released on the App Store, and it's a pixel perfect recreation of the original game, made compatible on your iOS device and Android.

So how does it compare with my Apple IIe memories? It's pretty remarkable; the game looks exactly as it did back then, even down to the sound of a spinning floppy disc as you wait for a new scene to load. The Easter egg that allowed you to play the game upside down is also perfectly preserved.

Because it's a direct recreation, it has a 4:3 aspect ratio, which means it won't fill you're iPhone's screen. Even on an iPad or iPad mini, the game doesn't reach the screen's edges, and black borders surround it. This is because there has to be room for touch controls, something the original version wasn't designed for. By placing part of the controls over these borders, your hands obstruct less of the gameplay.

To the left are the movement controls, and on the right, the six types of attack at your disposal. Since your hands are on the screen, even with the presence of those black borders, you sometimes can't see your health bar, especially when you're nearing death, because your thumb conceals it. Obviously, this was never an issue on an Apple IIe monitor, but on your iPhone or iPod touch's 3.5" screen (not so much on the larger iDevices), you may keep on fighting, oblivious to the fact that you seriously need to retreat and regain your health before the inevitable happens, and as with the original, you only have one life.

The game is divided into three parts: the courtyard, the main hall and the dungeon. Once you've successfully entered the building, should an opponent prove too challenging, you're offered the option of swiping to the left to rewind to your previous victory and try that fight again.

I understand why that feature is present in Karateka Classic, especially since many people are used to multiple lives, but sadly, it makes the game much too easy now: losing a fight doesn't mean having to battle your way from the very start, but merely gives you another go at that henchman straight away. The sense of achievement is actually gone and so is the psychological fear of dying, and therefore having to be careful in order to survive. Of course you could ignore this option and chose to start from the beginning again, but would you really do that, especially if you just died due to an unexpected booby trap?

The extreme challenge of a single life has been replaced with the casual certainty of unlimited ones.

What lets Karateka Classic down as well is a lack of a save feature. This is a mobile platform and you can't necessarily finish the story in one sitting. Of course, you can leave the game, go to other apps and get back to it at a later date, but if you wait too long, or open a memory-hungry app, Karateka Classic will reset back to the beginning.

If it was up to me, I'd remove the rewind feature and introduce a save option - but that saved game would disappear should your character happen to die, to preserve the challenge of the original. But, hey! I'm a purist!

Despite this, it's a fantastic trip down memory lane. The atmosphere is as I remember it, and although it doesn't hold a candle to modern games, this is the real Karateka. It's fun, exciting, and you actually have fighting options here, unlike the modern recreation.

$0.99 is a small price to pay to go back home again, and if you weren't around when Karateka first hit the shelves, it'll show you that you don't need gigabytes to make a compelling story that you'll want to test your skills against and see if you can defeat Warlord Akuma and win the heart of Princess Mariko, without swiping to the left, not even once. Just like in real life.

That is the way of the Karateka!

Rated 9+ for the following:
Infrequent/Mild Cartoon or Fantasy Violence

Requirements: Compatible with iPhone, iPod touch, and iPad. Requires iOS 4.3 or later. This app is optimized for iPhone 5.