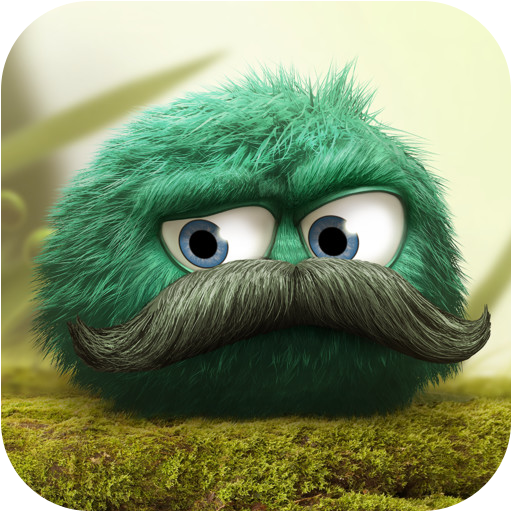 Leo's gold has gone missing. The thief has left a trail of coins like breadcrumbs to tease him into finding his hoard again, and thus begins the premise of this original game from 1337 & Senri.

Leo himself is a beautifully rendered ball of blue/green fur - with a large moustache and an Eastern European accent. You make him move to the left and right by dragging your finger on the left side of the screen, while the right side controls his up and down movement. Like a puffer fish, Leo can make himself bigger, which enables him to float and avoid obstacles, or slow down his fall. All of this is extremely well demonstrated in the tutorial.

"We started out with a physics world and a circle that could jump and move left and right," explains Johan Knutzen, one of the game's two programmer. "We prototyped different abilities and ways to control the character and finally settled on what Leo’s Fortune is today. We always wanted the character to have the ability to expand and use that ability as a way to jump from a surface. This was one of the core concepts during the design phase of the character. We added the floating ability as an experimental feature that we decided to keep during prototyping. The floating ability was inspired by Kirby’s Dream Land for Game Boy that I played as a kid."

Leo navigates a two dimensional world filled with puzzles and traps, and it doesn't take long before they start getting pretty challenging. Each of the twenty main levels set you the same three objectives: you must collect all the coins you can find, finish within a certain time limit, and not die, not even once - each successfully completed goal earns you one star. This would be daunting for anyone but none of these goals are compulsory - they're just there to give yourself a challenge; in fact you can successfully finish a level without completing any of them.

The easiest one to achieve is collecting gold coins. Getting the other two, especially together takes some skill and practice. But what's great about Leo's Fortune is that it doesn't penalise you for failing: you won't be forced to go back to the start of the level should you die, which can be so frustrating with other platformers. Instead, Leo reappears just a few paces from where he met his untimely end. There's also no limit to how many times he can perish, so you can instantly try and overcome that particularly tricky part of the puzzle without delay.

The locations Leo explores are absolutely gorgeous, not only in their detail, but also how Leo interacts with his environment; for instance you can push some objects around, avoid others, and if a circular saw gets a little too close to him, his fur will be ruffled. You could spend a long time admiring the artwork (and you really should), but you've got coins to collect and a fortune to find!

To help you on your way, the music and sound effects are top notch and complement the action perfectly. A few black and white cut scenes give you some background information about what's going on, but if you want to get to the action, you can just skip those, although I'd recommend you watch each at least once to fully understand what's going on.

The controls can be a little difficult. I personally found them more frustrating on an iPhone's smaller screen than on the larger iPad, especially when you have to master a particular combination of moving, jumping, floating and changing direction in mid air. Getting it wrong too many times because you get your fingers in a twist can be a little frustrating - such are the disadvantages of touch controls. Thankfully those combos are few and far between.

"The controls in Leo’s Fortune have a lot of black magic hidden within the code," reveals Johan. "We wanted the controls to be very precise and reactive to input but at the same time we wanted Leo to have inertia. Just making the character move left and right on a flat surface has special cases and carefully massaged code in order for the controls to feel right. There is very little science to it, and it is an iterative process of trial and error. The physics system also puts constraints on the character because technically you cannot expand anything in a rigid body physics world. In the end we had to add special zones to the levels that change how the controls work in order to get that last piece of polish."

If you're lucky enough to own more than one iOS device, your progress is automatically saved to iCloud, which is great since you don't need to have to go through any level or act you successfully competed on another device, unless you want to, of course.

Leo is doing well in the charts, and as Johan says himself, "It’s refreshing to see that a premium game without in-app purchases can make it on the App Store." It could well be that Leo's success is because, just like with Monument Valley, even a casual gamer can finish the story in a few hours, and having a completable yet challenging game is not something you experience every day. "Watching my dad swipe all five fingers across the screen while laughing hysterically was a blast," Johan continues. "He has never played any games before but he had tons of fun trying to make it past obstacles. It was an assurance to me that the game had visual appeal and that the character was likeable."

And likeable he is. Even the various little grunts he utters when he falls to his death or lands on a thorn (thorns are deadly to ball-shaped creatures - didn't you know?), informs you that this isn't the end, just a minor setback.

There are also a handful of optional bonus levels as you'd expect, which get unlocked after you've collected enough stars from a particular act. Don't expect to rely solely on just collecting coins to reveal them all - you'll also need to beat the clock or not die on at least one of an act's four levels; there has to be some challenge to this game!

And speaking of challenges, you may notice some golden cogs in difficult to get to parts of some levels. Each one unlocks its own achievement in Game Center. Can you find them all? Also, finishing the story unlocks "hardcore mode", were dying is no longer an option. Activate it and see how far you can take Leo on his journey.

Leo's Fortune is a great and enjoyable story with challenges for those keen to push themselves to the limit, as well as for the more casual players who would like to know how the story ends. It's all wrapped in a beautiful, enticing world that sounds just as good as it looks.

What more could you ask for in a game?

Compatibility: Requires iOS 7.0 or later. Compatible with iPhone, iPad, and iPod touch. This app is optimized for iPhone 5.

Direct Link to the App Store