Is This Finally the Birth of the Computer for the Rest of Us ? 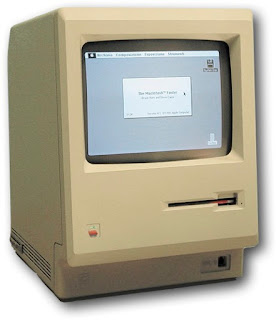 When Steve Jobs introduced the Mac back in 1984, it was designed to revolutionise the way people interacted with computers. They would no longer need to type in arcane combinations of letters and numbers to get anything done. Instead, they'd click on images on the screen.

And he was right: the Mac changed the world and what we conceived a computer to be… but it wasn't really for the rest of us: it was still confusing to use, difficult to properly understand, and even harder to fix, at least, for the majority of the population. Case in point: back then, it came with hundreds of pages of printed documentation. For all of its purported advantages, you still needed a strong level of knowledge to understand what was going on. Typing was never this difficult when all we had at our disposal were typewriters…

I haven't played with an iPad. All I have to base my feeling on is the video of the keynote and the reactions of people who actually spent time with it, like Stephen Fry, John Gruber, Daniel Eran Dilger and Andy Inhakto. But from what I can see, I'm left wondering if this is finally a computer that can be understood by nearly anyone without having to read manuals or attend classes.

An iPhone is so simple to use it only takes a few minutes to get to grips with it. Everything feels very intuitive. The iPad appears to be an extension of that belief, only much faster and with much more screen real estate. It's not a computer as we've come to expect: everything is hidden away from the person using it and all they have to focus on is what they want to do with it. Do you want to write a letter? Tap on the Pages icon. Do you want to browse the web? Tap on Safari. Etc.

I've read lot about people complaining that the iPad can't multitask, that only one program can be used at a time. But the iPad hasn't been designed for people like you or I in mind - people who understand a fair amount about what makes a computer tick. It's been designed for people who are still intimidated by computers or those too young to fully understand them. Would you be surprised to know that I still have to convince people I train that they can in fact listen to music while browsing the web while their Mac is importing photos from their camera into iPhoto? The fact that they're amazed by this isn't the point: despite all the computer power at their disposal, they're still used to working on one program at a time. That's who the iPad is designed for.

Most people are scared of computers. They know they can do so much with them and that's what's intimidating - not to mention all those cryptic error messages that often pop up, and let's not get started about the fear of getting a virus by simply switching the machine on. Up until now, computers have been designed by geeks for geeks. Apple worked really hard to make Macs more approachable, but even these take a little getting used to, so you can imagine how Windows users must be feeling…

Now, we may be witnessing the dawn of the third computing era. We've moved from command lines to mouse-driven graphical interfaces. Everybody's been looking for the next computing metaphor, wondering why it's taking so long to come up with something new. Everybody was expecting a big bang, like the Apple II and the original Mac were. Despite the amazing success of the iPhone, it looks like the next chapter of computing happened so subtly, it took everyone by surprise. Touch is the next interface and it's been done right two years ago. The iPad is a refinement of that revolution.

It may not do much right now, but it actually does a lot more than the Mac did at first, thanks to its compatibility with 140,000 iPhone programs - and we're still two months away from launch. Who knows what the developers will have designed by then. If things work according to Apple’s plan, five years from now I may be editing my latest film project on an iPad descendant.
Posted by Steve Paris at 12:00