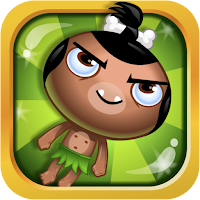 Back in January 2009, a two-man team released a game on the App Store. Calling it a game was actually beyond generous - there was nothing you could really do with the six little pygmies on a tropical island. But promises of regular updates were made and before long, new features were added, mini games were included and Pocket God became a mobile game phenomenon. After 47 updates, it's still one of the most original and highly imaginative games for iOS, even though its graphics have never been updated for the Retina Displays.

The success of this app prompted a sequel, Journey to Uranus, initially exclusively for the iPad, but although it featured better graphics and more immersive mini-games, it never reached the success of its predecessor. The pygmies' adventures also spawned an ongoing comic book series.

The original Pocket God got its last update nearly a year ago, to coincide with the Mayan apocalypse. We'll never really know for sure, but it's possible this update was instrumental in helping humanity avert the end of the world.

So what do you do for an encore? Well the Bolt Creative team have come up with an endless jumper game based on their iconic characters that will work on any iOS device, be it an iPhone, iPod touch or iPad.

I don't normally go for such games, finding the endless repetition a little tedious over time, but I thought I'd give this one a try, mostly based on the company's reputation.

At first glance, Ooga Jump is pretty standard fare: you have to jump from platform to platform, avoiding obstacles and grabbing diamonds along the way, which you can use to purchase new characters, new backdrops, one-time power boosts, you get the picture. If you don't collect diamonds fast enough, you can always buy more as in-app purchases.

There are different types of platforms to land on, and you can slam down on them by tapping the screen to jump higher or release additional diamonds. The game's integrated with Game Centre and you can see how far your opponents got with sign posts bearing their name as you jump ever higher. There are no iCloud saves though, which means that if you own multiple iOS devices, you won't be able to transfer your score and purchases from one to the other.

To keep your interest going, you can collect awards by repeating specific actions often enough, but these don't appear to enhance your gameplay in any way. There's also objectives which keep your interest  going, help you refine your skills, and earn you extra diamonds.

It's really nothing we haven't seen before, so what makes Ooga Jump special? Well for one thing, the animations. The cartoon characters are beautifully drawn and each one features their own unique moves. They don't add to the gameplay aside from making it fun to watch - and when you play with an endless jumper or runner game, keeping you interested is crucial, otherwise there's no real point in picking up the game again. You get to play with a regular Pygmy, two characters from the comic book series (Nooby and Sun), or a Zombie.

The same goes for the backdrops. They're all beautiful to look at. You start with a tropical setting reminiscent to the Pygmies' original island, but save up enough diamonds and you can play on Uranus (from Journey to Uranus) or the Underworld (inspired from one of Pocket God's mini games). And they're all huge. I've played with two of them for a while and I've yet to see a repeating pattern.

All obstacles have been inspired from the previous Pocket God games, a monkey that rips your face off if it catches you, a barking spider (that actually barks), flesh eating ants, falling meteors, flying dodos, a scythe-throwing statue and an ageing device. In fact the deaths are fun enough that you almost don't mind dying just to see the animation take place.

If you're a fan of the original games, you'll also appreciate revisiting old friends and enemies in gloriously improved graphics.

Ooga Jump is a friendly game with a fun sense of humour which makes filling a few minutes of your time with exciting entertainment. What more could you ask for for £0.69? Well, updates. Pocket God was worth the same and got regularly updated to become the epic game that it is. It's uncertain if Ooga Jump will follow in the same footsteps since its premise is much more constrained than Pocket God's, but it's already received an update which introduced Nooby, and dropped the cost of the additional characters and backdrops. With another update in the wings (ie, going through Apple's approval process), it looks like Bolt Creative are aiming to improve their new game frequently, as had been the hallmark of their greatest success.

Rated 9+ for the following:
Infrequent/Mild Cartoon or Fantasy Violence