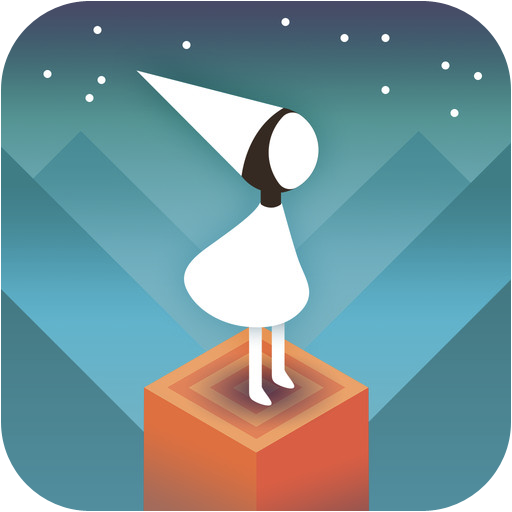 We keep hearing bleak news when it comes to the App Store; what was once a thriving and exciting revolution is giving way to "me too" apps, poor clones of successful games and a cataclysmic avalanche of "freemium" games based on grabbing as much money out of you or your children as possible through the highly deceptive use of in-app purchases.

But every now and again, something surprises and delights you, and reminds you that games are meant to give players pleasure, not frustration. Monument Valley does exactly that.

You control Ida, a lost princess, who has to make her way through ten levels of weird and impossible architecture, to unlock the mysteries of her past and her potential future. What makes this game stand out is its design. The game is not only beautiful to look at, despite its apparent graphical simplicity, but the sound effects complement it perfectly. It's a great immersive experience, whether you're enjoying it on an iPad or iPhone.

The seamless integration with iCloud means that if you own more than one iOS device, you'll be able to pick up where you left off on any of them, without you having to do anything to set this up.

Whichever device you own though, the game is only played in the portrait orientation. You tap where you want the princess to go, getting her to step on blocks to activate specific structural changes, or you move parts of the building around to enable her to complete her task. But that's where it gets interesting: the architecture is the most fascinating part of this game as you can only solve your problems by creating Escher-esque impossible 3D designs. Ustwo, the team behind Monument Valley, aren't the first to come up with such an idea: echochrome was there before it for instance, but Monument Valley's perfect use of iOS' touchscreen capabilities and amazing design aesthetics sets it apart from the competition. Ken Wong, the artist and designer of Mountain Valley adds, "Some people seem to want to reduce games to clones of each other if they share a mechanic. Yes, we were aware of echochrome, but only a few of the team members have played it. Sword & Sworcery, Portal and Windosill were far more influential on the design of Monument Valley."

"We like Escher," he continued. "But we also absorbed many other sources of inspiration, from Indian palaces to typography posters to Brian Eno. The idea for Monument Valley came out of brainstorming sessions a year ago. I've always wanted to make a game about architecture, and during these sessions I came across Ascending and Descending. That's what gave me the idea for guiding a character from the bottom of a building to the top. By keeping the camera far out, using an isometric perspective, we could make the architecture the main feature of the game."

The apparent simplicity in which the player can manipulate the structure and move the princess around belie how complex coding the game actually was, and Ken pretty much confirmed this: "creating systems so that characters could walk on impossible geometry was hard. Working with a very minimal style of visuals was hard. Creating a game that people who don't play games could not only complete but enjoy was hard."

This last part may be causing some frustration with hardcore gamers, as Monument Valley, though challenging, can be completed in under two hours. But there's actually a reason for that, and it underlines the whole philosophy behind the creation of this game. "We felt that there was more value in doing a short, very focused experience with puzzles that wouldn't overly frustrate people, and having a definite end of the game," said Ken. "The sense of closure you get when finishing a game is not something most people get to experience. We also wanted to make the game feel very inviting and approachable, in everywhere from the art to the sound to the puzzle design. Challenge can play an important part in game design, but we've found there are many people out there that play more for the interactive and aesthetic experience, over the challenge."

And that's exactly what I found myself. Monument Valley is gorgeous, it draws you in, but the challenges are far from too complex. In fact, it doesn't take long before a solution presents itself; you just have to learn to not think in the usual three-dimensional way, and often, turning or rotating an object just so will bring two faraway sections close together, allowing Ida to carry on with her quest.

Sadly though, it feels that just as you get used to the more complex levels, the story finishes much too soon. But this may not actually be the end of the road for Ida and the mysterious Crow People, as Ken revealed to me: "during production we wanted to remain very focused on creating the best standalone experience, not holding anything back for the future. We decided we'd wait and see what people thought. The response has been overwhelmingly positive and players definitely want more levels, so we're going to make some. It’s a bit early to say when, but we're going to stick by our principles of making every chapter a special, unique experience."

So if you loved the idea of wondering through mind bending architecture but somehow were put off by the shortness of the adventure, hold on to your eternal staircase or impossible three-dimensional triangle, as there may be more to come.

In the meantime, £2.49 is a small price to pay for a game designed to be enjoyed and give you a smile as you solve an interesting puzzle. It's a lot cheaper than supposedly free games that force you to wait for ever for a particular task to finish unless you pay real money to complete it quicker. What joy is there in such games? You'll get joy in spades with Monument Valley.