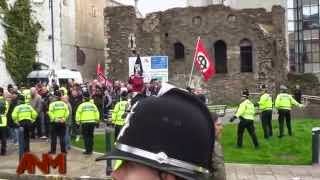 A demonstration in support of White Pride turned into a fiasco in Swansea on Saturday when it became clear that none of the parties present were singing from the same hymn sheet.

The confusion began this week after Councillor David Phillips had stated his objection to the far right demo taking place in the city and seeking police co-operation to relegate it to a less central location.


This determined position of the Council led people to believe the demo was off and late in the week the activist group Unite Against Fascism published a statement which said:

The UAF then encouraged its members to attend the anti-Bedroom Tax demo in Cardiff instead. Nevertheless counter-demonstrators still substantially outnumbered the White Priders although both sides accused the other of importing their crowd from outside Swansea.

And perhaps inevitably there were two arrests as demonstrators broke through the police cordon.