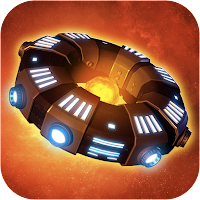 In addition to infinite runner and jumper games, another firm favourite among mobile games are physics-based puzzles, like the insanely popular Angry Birds or Cut the Rope franchises. One of the latest addition to this lineup is Solar Flux Pocket, a game which you'll be able to play on your iPhone and iPod touch. iPad owner will have to cope with scaled up graphics or buy the dedicated iPad app, Solar Flux HD, which is actually a different game, offering different levels.

The objective of Solar Flux is to save the galaxy: its suns are dying, and you must collect and deliver the needed plasma to revive each one.


There's a lot to take into account in this game which makes it a much more satisfying series of puzzles than just eating candy or killing bad piggies.

Aside from navigating around planets and using their gravitational pull to orbit around them, you must keep an eye on your shields which drain when exposed to solar radiation, as well as your available fuel, the less of which you spend the higher the score you'll get.

With that in mind, you have to strategically navigate around the planets, recharging your shields while in the shadow of one of them and preserving your fuel as much as possible. You can also use the energy wave generated by firing plasma into the sun to propel yourself without using your ship's own internal reserves.

It's not that fuel is scarce. In fact, in the early levels, the amount available far exceeds what you need to complete a task so you could choose to use brute force (or in this case your jets) to complete your mission should you want or need to. This gives you a choice of strategies - go for the stars or get the job done any way you can, which means that you're less likely to get stuck on a particular level and give up in frustration, unable to progress further.

In order to navigate, you need to tap on the screen in the opposite direction of the one you want to travel to (essentially, you're tapping in the direction in which you want the jets to fire from), but if you find this confusing, you can inverse that behaviour in the preferences. Tapping on the sun will fire the collected plasmas in a direct line from wherever your ship happens to be - so make sure you only do this when there are no obstacles between you and your target.

Each sun needs three plasmas to regenerate, which is something you need to plan for as well when you must regenerate more than one star per level: firing at a sun releases all your stored plasma, so if you send too much to one, there won't be enough for the others and it's game over for you.

As you'd expect, the puzzles get progressively more complex the deeper into the game you get, but you'll find that the challenges are divided in groups, based around specific strategies, like focussing on slingshots around orbits, preserving shields hiding behind planets, or navigating by surfing on solar flares, all of which helps keep the interest and originality going. Each set starts with an easy tutorial level to help you understand the new task at hand.

There are currently two galaxies to play in, the promise of a further two to come, and not a hint of an in-app purchase in sight.

There's a couple of features I would like to see, like being able to zoom out and observe the whole playing area to help you plan your course of action. Also, there's no pause or restart option while playing, so if you've made a mistake, you have to manually fly into an obstacle in order to destroy your ship so you can start again, which can get a little frustrating.

Having said that, I really like the fact that you can see as you play how many stars you'll be earning: they disappear as you use fuel, so if you want the best possible scores, you need to plan accordingly.

In many ways, Solar Flux reminds me of another iOS game, Osmos, with its beautiful animations, soothing music, navigation mechanics, and specific iPad and iPhone versions, but there the similarities end: Solar Flux is a unique and challenging physics game which offers more complexity than you usually expect for only £0.69 (the iPad version will set you back £1.49).

It does suffer from the same problem as all other physics-based games though: limited replayability, but for that price, it'll keep you busy for quite a few hours. 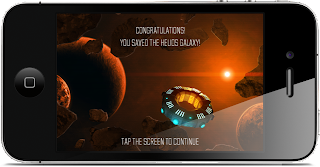 Compatibility: requires iOS 5.1 or later. Compatible with iPhone and iPod touch. This app is optimised for iPhone 5.