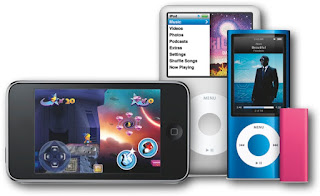 Today, Steve Jobs returned to the stage after his medical leave of absence and announced Apple’s latest music-related releases. As has become customary for a September event, the entire iPod range was updated and a new version of iTunes joined in the party.


The addition of a video camera to the back of the new nano wasn’t surprising: after all, the rumour sites had mentioned this possibility for weeks now (although it only records video, not stills, just like the Flip). Adding a radio will also prove useful to some, especially with its ability to pause live playback. Tagging songs you hear to purchase later in iTunes when you get back to your computer is a nice touch.
But what is strange, especially since it’s now on the nano, was the complete absence of a camera for the iPod touch. Now, the product that sits in between the nano and the iPhone lacks a feature that the other two models have.
How weird is that? Were they afraid that this might have cannibalised sales of their iPhones? But didn’t they also say at a recent conference that if there was going to be cannibalisation, they’d rather they do it to themselves than see a competitor taking sales away from them?
Maybe sales of the iPod touch are doing just fine as they are but since the other iPods are slowing down, this was an way to hopefully boost the numbers up again.
After the addition of a powerful video camera to the iPhone 3GS, including one to the iPod touch seemed like a no-brainer, especially since the new touch is as powerful as the 3GS… the decision makers at Apple obviously thought otherwise. I know a lot of first generation iPod touch owners, myself included, who were ready to upgrade to a new model if it had a camera, making a great product even more indispensable. That’s a few lost sales for Apple but I doubt this will make a difference to their bottom line.
Although, if a substantial number snub the new touch, maybe this’ll force Apple to reconsider. After all, they did put FireWire back on their 13” laptops and matte screens are now an option for the 15” models.
In the meantime, those who couldn’t afford the expensive monthly iPhone contracts but were hoping for a camera in the new touch will just have to be satisfied with their current possessions or buy something that isn’t exactly what they wanted. Getting a product from a competing manufacturer is always an option, but the lure of 75,000 programs available on the App Store may make this unlikely.
Posted by Steve Paris at 12:00