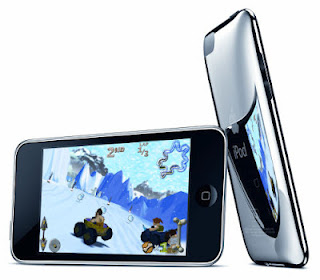 I was seven the first time I went on a long-haul flight. I had many more opportunities to experience this mode of transportation for years after that, until the end of the millennium. In all that time, the entertainment system never changed: we were all given the choice of one film which we all had to watch on the same screen, at the same time.


Recently, this all changed and each passenger got their own personal screen and had the opportunity to choose what type of entertainment to enjoy, be it a film, TV show or even games, at any time during the flight. I got introduced to this new system shortly after I got hold of an iPod touch and this caused a problem: the idea of having a screen within arm’s reach was very exciting, having already interacted with my iPod for a few weeks and loving it.

Unfortunately, the plane’s system was nowhere near as high tech as that consumer device. For one thing, it wasn’t equipped with a touch screen. This device begged to be touched, but could only be controlled with a remote. On top of which it was incredibly easy to crash it and be faced with familiar Windows error messages, something my eldest daughter did numerous times during the flight with increasing frustration.

A few months later, my family and I were on another flight and faced with another entertainment system. This time, it could be controlled by touch… Actually, it was more like ‘press as hard as you can for the sensor to recognise the command’. The touch screen was also an obvious new addition as the cursor was still present on the display and the interface, again, left a lot to be desired.

Apple has nailed the entertainment system on the very small screen with the iPod touch and iPhone so why is it that airlines keep using Microsoft technology to power their machines? I wouldn’t mind if it worked as advertised, but sadly, most of the time it’s just an exercise in frustration.

This got me thinking: are the other travellers – or most of them anyway – tolerant of these unfriendly devices because they have grown used to struggling with badly designed devices? What would happen if Apple got a contract to fit an entertainment system on an airline built around iPhone/Apple TV technology? How would it affect the passengers? Would a glimpse of a better design make them realise how frustrating interacting with PCs can be? Could it join the iPod and iPhone and act as a catalyst to bring more people to a better computing platform?

Since the majority of new cars in the United States come fitted with iPod connectors as standard, it’s obvious that Apple aren’t averse to partnering with big companies. Maybe going for the airline market could be the next logical step. It would certainly make those flights a lot more pleasant and stress-free.
Posted by Steve Paris at 12:00