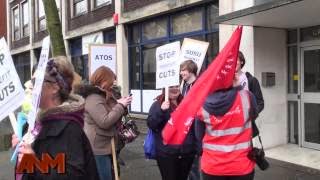 Citizens met outside Atos Offices in Grove Place in Swansea on Wednesday, as they did in cities and towns all over the UK to protest at the manner in which Atos, a French multinational contracted by the Coalition Government to oversea disability assessments and cuts has conducted itself.

David Cameron reassured Britain recently that no expense would be spared to help those with flooded homes, a stark contrast to the experiences of those sick, disabled, and often dying people deemed fit to work.

On the same day, David Cameron said that cutting benefits is part of a "moral mission" and that the welfare reforms are about giving "new purpose, new opportunity, new hope" -- but there wasn't much evidence of that among the protesters in Swansea today.