I've always had a problem watching those early 3D movies, those that necessitated wearing special glasses fitted with a separate red and blue filter. Something about them didn't feel right at all. I got nauseous and disorientated watching them, but Angel and I were keen to see Gravity, and in my neck of the woods, you couldn't get to watch it in 2D unless you were open to missing work or the school run, or both.
Besides, these modern movies have "new and improved” RealD 3D technology, so maybe those effects wouldn't be as bad. So off we went to the cinema, put on those special glasses, and hoped to enjoy the show.

I was initially worried because a 3D trailer of Walking with Dinosaurs made me feel really sick, and not just because the story looked riddled with clichés and something we've seen dozens of times before. No, the 3D made me sick. I hoped it was due to the fast editing required in all trailers, so I took my glasses off and waited for the real show to start.

Gravity explores how an ordinary person placed in unfamiliar surroundings deals with extraordinary events. The plot and story are razor thin, you hardly know anything about the characters or what's happened, it's just how they react to what's going on around them. The acting is excellent though. You can tell George Clooney was really enjoying his part, and Sandra Bullock is brilliant. There's a scene in the Soyuz capsule which is particularly effective.

But the real stars of the show are the special effects, the cinematography and the editing. There's none of those frenzied shots where the camera moves more than the action does and some effects like how the camera pans towards an astronaut then moves into the visor, and turns around so you can see all the head-up display information that astronaut sees, is amazing.

The weightless effects are extremely well done too, although some of it felt a bit wrong somehow, but never having experienced weightlessness myself I can't really comment on this. However, if you really want to see what happens when you cry in space, check out the ever excellent Commander Chris Hadfield.

But at the end of the day, there isn't much content here, and it's really like eating popcorn. It feels nice but leaves you unsatisfied if what you're looking for is depth.

If you love special effects, you'll love this film, but if you're after a space disaster movie with more meat, Apollo 13 would be better suited to your tastes, and at least this one has the added benefit of depicting actual mind blowing events and remarkable human ingenuity in the face of impossible odds (just ignore the last monologue as it really is dire).

Interestingly enough, the 3D effect of Gravity didn't make me feel nearly as sick as that dinosaur trailer, so my suspicion of the fast editing coupled with the 3D causing motion sickness was somewhat confirmed, but it didn't stop me feeling nauseous for well over an hour after the movie had ended. Driving home was an interesting experience!

So what was going on?

I pointed my browser towards Google and found an answer pretty fast. According to this article, it's all to do with your inner ear. As I'm sure you already know, this is where your body uses fluid to sense balance and motion. Your own built-in gyroscope. When there's a conflict between your eyes and your ears, like when you're reading a book in a car - your eyes think you're still but your ears know you're moving - you can end up feeling nauseous.

3D movies act in reverse: you eyes see the motion and depth, but your ears keep telling your brain you're perfectly still, and the result is the same: nausea.

It turns out that colour plays a factor too, and we can tolerate moving black and white images far better and for longer periods, than coloured ones, which perfectly explains my reaction to the vibrant dinosaur trailer and the darker, pretty much black and white feature that came after it.

The same article even explained why we have such a reaction when our senses contradict one another. Apparently, this is similar to the effect some types of poison have when they're introduced into our system, and the first thing your body will want to do if it thinks it's been poisoned it to throw up all that popcorn onto the person seating in front of you!

Not a nice experience for such a premium priced cinema ticket, and the weird thing is, we all feel this to a greater or lesser extent, except for the small minority of us who have a different inner ear and cannot experience any kind of motion sickness, but I doubt these 3D movies are made solely with those people in mind. 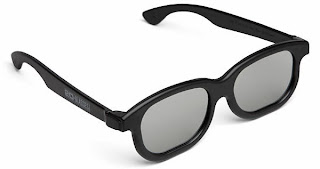 So what do you do if all your mates want to go see a 3D movie and you're one of the unlucky hyper sensitive ones to this kind of motion sickness? A little bit of online digging might bring up Think Geek's amazing 2D-glasses which claim to transform the information from 3D images back into a nice flat 2D film. Sounds too good to be true, right? Well it started as an April Fools joke at first, but unbeknownst to Think Geek, an enterprising developer was working on an actual product at the time the hoax was made.

Forbes interviewed the inventor back in 2011 and you can buy them through the developer's website and Amazon. In an ironic twist, Think Geek ended up creating their own version of the product. So it certainly looks as though you'll be able to join your friends to those 3D movies without bringing along a bucket and mop with you!