I upgraded to iOS7 on my iPhone 4S overnight and was greeted with a brand new phone when I woke up. Here are some thoughts I’ve had about this update having used it full time since then:

The first thing I noticed was how big the icons look. In fact they’re ever so slightly bigger: iOS6 icons were 114x114 while iOS7‘s are 120x120. This 5% difference, along with icons that are now (or will be when developers update their apps) clearer, make the apps stand out more. And that’s the thing: those new icons look so much better “in the flesh” as it were than in any of the promotional photos I’ve seen. This really is an OS you need to hold and use to fully appreciate the work that’s gone into it. Photos don’t do it justice.


I love the fact that folders can now hold many more apps (you swipe through pages within the folder just like you do with the main pages of icons on your phone), but a single page now holds fewer apps: 9 instead of 12.

I knew Spotlight had been expanded, no longer residing to the left of the first page of icons, but available from any page. Just swipe down and there it is… except it wasn’t. Swiping down for me revealed the Notification Centre, so how could I reveal Spotlight it if too came down from the top? Thankfully, Grahame Critcher (@themgrahame) and Jon Adair (@jon_adair) showed me how it’s done: swiping from the top reveals the Notification Centre, but it you swipe from the middle, that’s how you reveal Spotlight. Brilliant, and so simple - when you know how!

I like it that when you tap on an icon, the app zooms in from that icon. Opening a folder displays the same effect. When you leave an app or close a folder, it then zoom back into its location on your Home Screen. This helps give your apps a sense of place.

The Lock Screen is brilliant, not just because of its redesign, but because you no longer have to swipe to unlock  in one specific area - where it says “swipe to unlock”. Now, you can swipe left to right anywhere on the screen and you’ll be asked to enter your passcode (you do have a passcode on your iPhone, right?)

The beta of iOS7 showed that it was possible to use a panoramic photo as a wallpaper and being able to pan across it by moving the phone from left to right. That sounded like fun, but sadly, Apple have disabled the feature in the general release.

When it comes to choosing a wallpaper, don’t select one that’s too bright: because the icons and their titles no longer have a drop shadow as they used to have in iOS6, brighter images can make them difficult to read or to distinguish the icon from the background. It does work great with darker images, but that limits the photos you can use. 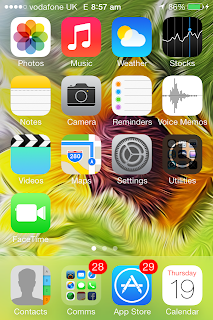 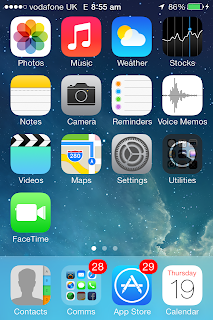 As a fan of taking panoramic views and videos, I like the fact that the Photos app now gives them their own dedicated albums - making them much easier to find. I also think the Moments > Collection > Years breakdown of the photos works really well, except that I was expecting to be able to zoom in and out of those categories with my fingers, not by tapping on a button at the top of the screen. Somehow, for a touch device, that makes it less intuitive.

The Camera app appears to switch between stills and video mode much more quickly than before which is fantastic. It’s also good to see that the Panoramic feature is no longer hidden in the now-defunct Options button so more people will be aware of its existence.

It’s great that FaceTime now appears as a separate app on your iPhone, as opposed to be hidden somewhere in your Phone app. It’s now just like you expect to find it on an iPod touch or iPad. Not only does that create consistency across iOS devices, but it also makes FaceTime much easier to access on an iPhone.

Something that had been frustrating me on all previous iOS versions was the fact that if you wanted to read your downloaded emails in a place where I couldn’t get online, more often than not, I’d have to tap ‘OK’ on dozens of error windows telling me each and every one of my multiple email addresses’ outgoing and incoming servers couldn’t be accessed. Now, after six gruelling years, this is no longer the case: a single window pops up telling me I can’t get new mail because I’m not connected to the internet. Voila! Was it really so hard Apple that I had to endure this mayhem through 6 versions of your OS?

Of course, being able to open more than eight pages in Safari is a godsend! And I also like the way the current pages are displayed.

But what I’m disappointed by is the fact that you still can’t bold, italicise or underline text in the Notes app, even though you can do that on its Mac counterpart and those choices appear on my iPhone when the notes sync via iCloud, I still can’t underline, or bold, or italicise anything in Notes on iOS.

Nor can I add coloured text in Mail. That’s still not possible, but perhaps the worse thing of all I’ve found in iOS 7 is the shut down slider. It’s probably the ugliest thing in that system and I think Apple’s engineers know it’s ugly because you can’t even take a screenshot of it!

Have you got something you’d like to add to the list? What are your thought on iOS7? Write it down in the comments section :)
Posted by Steve Paris at 08:30