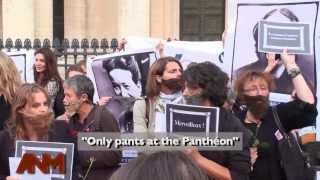 A group of some 150 womens rights activists staged a protest outside the Pantheon in Paris on Monday to send a message to Francois Hollande that it's time to even up the representation of women in this prestigious institution.


"Currently, there are only 2 women at the Panthéon, compared to 71 men."

I asked activist Olga Trostiansky, president of the Coordination Française pour le Lobby Européen des Femmes, what the President has done so far to promote equality.

"Half his government ministers are women, and he assigned a woman minister to be responsible for women's rights, something we haven't seen in France for 30 years."

The outspoken satirical collective La Barbe were also vocal at the demonstration.

"It's a grammatical fact: genius is masculine, imposture is feminine"

Anne-Marie Viossat, member of that collective said: "We don't want to take power, we're not interested in that at all. We want to share it."

Ms Trostiansky added: "We're not here to bring solutions to women in high positions, but we do have to bring those too, but we also support initiatives, so that women in difficult situations can improve their position."

Ms Viossat continued: "It's a very topical political game at the moment: for now, man, the patriarch, holds the power and doesn't share it."

Ms Trostiansky concluded: "We're somewhat lucky to have this government and that minister, but on the other hand, we must push forward and attempt to convince them on this matter. Women must be part of French history."

Let's hope François Hollande will see the value of the permanence bestowed by the Panthéon, not least in ensuring that his own current openness to equality will endure.

"What does it mean in our society when we ignore the women of the past? It means that it's highly likely that we forget them in our present."
Posted by Steve Paris at 13:17