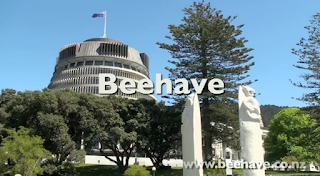 My wife and I have produced an online satirical show for a while. It started as an attempt to bring attention to the fact that there was no welfare protection for children in private schools in New Zealand. None. The school could expel you from one day to the next without ever giving you a reason or offering you a right of appeal. This dangerous and damaging loophole was recognised by the Law Commission and they proposed a review.


Sadly - or perhaps predictably - the right-wing government dropped all those changes and replaced them with an amendment to the law to - among other things - enable them to offer private schools unconditional loans.

My children had been expelled from a private Steiner school because the management refused to deal with the fact that my eldest - and others in her class - were being regularly bullied. They got rid of us because we asked them to do something about it.

So we made Beehave (a play on words since the New Zealand parliament is nicknamed the Beehive as it looks like one) and for two foreigners working on their own while having to home educate our three kids with no support, because they were too traumatised to go back to school, we got pretty close: after having spoken to us, Trevor Mallard, the shadow minister for education, Catherine Delahunty, Green MP, and Kelvin Davis, then Labour MP, spoke in parliament to try and re-introduce those Law Commission's recommendations.

But it wasn't to be.

However, we had a lot of fun creating Beehave - making light-hearted comedy out of a traumatic event was very therapeutic - and so we've made a few other episodes since then, and here's our latest, focusing on Prime Minister's John Key's recent State of the Nation speech.